Here is a post by Finnskogen Farm from the first of the year with a great recipe for you!

When what to our wondering eyes should appear; a Bulgarian video that promised beautiful egg yolks suspended on clouds! The video was completely in Bulgarian, but the message got through: whip the whites, and bake the eggs together. Since eggs are one of the Finnskogen staples with our ever-expanding flock, this recipe needed to be tried. Although, “recipe” may not be the best name for what these are; “procedure” is probably better suited.

Creativity can run rampant through this procedure–with add-ins, and sides that can take your meal to a new level. Since this was our first try, we kept things simple as a control. Next time, we will definitely use add-ins on our clouds like crumbled bacon and Parmesan cheese. Or served on top of a slice of hot, buttered toast. Mmmmm!

Here is the procedure we used:

Instructions:
1. Preheat oven to 450°F.
2. Lightly grease a cast iron skillet or other oven-safe vessel.
3. Separate the yolks and whites of eggs. Note: We found that one of the yolks broke as we were transferring them later on, so it may be advantageous to use separate ramekins for each yolk.
4. Whip the egg whites until stiff peaks form. Gently fold in your add-ins at this point, including salt and pepper.
5. Scoop in four equal ‘clouds’ into your skillet. With the back of a spoon, push a well into the center of each cloud. This will house the yolk.
6. Place in the oven for 3 minutes.
7. Remove, and (carefully) set one egg yolk into the well of each cloud.
8. Return to the oven for another 2-3 minutes, or until your yolk is set to desired “doneness”. Don’t walk away! The whites will begin browning very quickly! 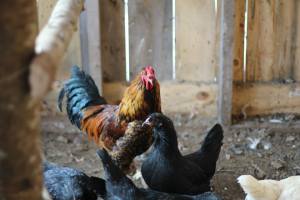 We removed the clouds with a spatula, and served with fried slices of pork ribs from the night before. We found that the clouds stayed fluffy, and the slightly crisp, browned sections were the most savory. Next time, we will probably add the salt to the whites themselves, and increase the amount slightly. This time we used around 1/2 to 1 tsp, and it was added to the chives, and folded into the whites from there.

Overall, this procedure was extremely successful, and we will definitely be adding it to our breakfast/lunchtime repertoire!